You will be redirected to your dashboard shortly. We will also call you back in 24 hrs.

Visit These 9 Mysterious Temples Of India In 2020 & Get Amazed By Their Weird Rituals! 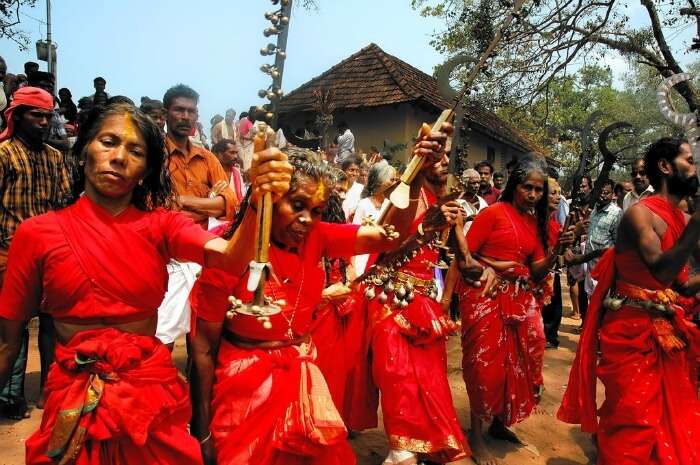 India is the land of 64 crore god and goddesses, with a multitude of holy cities and shrines of spiritual gurus to a motorcycle.

Here, temples can be found at every step of the way, but only some of them are odd, strange, weird or unusual in one way or another. Some of these mysterious temples of India are famed because of their unconventional deities, some because of their exorcism rites, and some because they are more than 2000 years old.

This blog is dedicated to those eccentric temples of India; take a look to see how many you have heard about.

In the sleepy little Dausa district of Rajasthan, thousands of devotees turn up at Mahendipur Balaji Temple to rid themselves of ghosts, demons and other evil spirits every day. Offering penance in extreme ways, pouring boiling water on oneself, hanging from the ceiling, chaining themselves to walls, and banging their heads against the walls is said to rid a person of all things evil. One of the most mysterious temples in India, Balaji temple is also famed for being probably the only place in India where exorcisms by priests are still carried out.

No Prasad is offered at this temple, and it is said that once you leave the temple, you must not turn back to look at it; who knows, evil spirits might take that as an invitation to inhabit your body. Chalk it up to another mystery of Indian temples.

Suggested Read: 11 Stunning Temples In Singapore You Must Visit On Your Holiday

Looking To Book A Holiday Package?

Perched atop the Nilachal Hill in Guwahati, Assam resides the Maa Kamakhya Devi Temple, one of the most famous temples in India. It is one of the oldest of the 51 Shakti Peethas in the Indian subcontinent. The temple does not have a sculpture to worship, however, what it does have is the yoni or vagina of Devi Sati, the wife of Lord Shiva, covered with a red silk sari.

Every year during monsoon, the goddess menstruates, and the temple is closed down for three days. It is also when the Tantric fertility festival or Ambubachi Mela is celebrated here, till the fourth day when the temple reopens. It is also said that the underground spring that flows in the sanctum of the temple turns red on these three days. Devotees are offered a piece of the red cloth used to cover the stone yoni during the days of menstruation as ‘prasad’.

Must Read: 15 Secrets Of North East India Locals Have Been Keeping To Themselves

During the full moon every month, the Devji Maharaj Mandir in Madhya Pradesh, is the place where devotees come to rid themselves of ghosts, demons, and evil spirits. As penance, a common practice is lighting camphor tablets on bare palms to scare whatever evil spirit resides within to leave the body. Running around or being smacked by a broom are other options.

But the weirdest tradition is the annual “ bhoot mela” or ghost fair that is held in the temple grounds, to appease evil spirits. One of the unsolvable mysteries of India for sure; warrants a visit?

Suggested Read: 12 Jyotirlingas In India To Visit In 2020: See The Spiritual Side Of The Country

4. Kodungallur Bhagavathy Temple, Kerala: Abusing The Goddess During A Festival

The earthly abode of Goddess Bhadrakali, a gentler reincarnation of Goddess Kali, the Kodungallur Bhagavathy Temple witnesses a bizarre seven-day festival celebrated annually, the Bharani Festival. Men and women wearing red apparel and carrying swords swarm this Indian temple, running around in a trance-like state. They hit their heads with the sword, blood pours freely, and they enter the temple hurling choice abuses and singing lewd songs about the Devi.

Offerings are not made in the general fashion, instead, they are thrown at the statue of the goddess, and the temple rafters are hit repeatedly with sticks. The temple is shut down for 7 days after the festival, admittedly to clean the blood stains.

Suggested Read: 13 Best Kept Secrets of Kerala That Locals Have Been Keeping To Themselves

5. Venkateshwara Temple, Andhra Pradesh: The Richest Temple Of India, And How!

Most temples rely on offerings and donations from devotees for their welfare, however, there are a few that have cornered a lucrative, albeit unusual, market. Selling human hair to the Western countries. The Venkateshwara temple is the abode of Lord Vishnu, a god that accepts human hair as a symbol of sacrifice.

The temple, actually one of the most historical temples in India, has two huge halls lined by barbers, who are responsible for shaving the hair off more than 12,000 pilgrims every day, reaching nearly 75 tons of hair annually and earning more than 6.5 million USD. These are sold to Italian wig manufacturers and the Chinese who use extracts from the hair for food preservation.

Planning your holiday but confused about where to go? These travel stories help you find your best trip ever!

Would you visit a temple that appears and disappears throughout the day? Located close to Vadodara in Gujarat, the Stambheshwar Mahadev temple is one of the most mysterious temples in India that shares shores with the Arabian Sea. Lord Shiva resides here, and blesses those who dare to venture into it. It is one of the most famous temples in India.

The only weird thing about this temple is that it can be visited only during hours of low tides. In hours of high tides, the temple is swallowed up completely by the sea, and it reappears hours later when the water descends.

7. Brahma Temple, Pushkar, Rajasthan: The Sole Temple Of The Lord

When Aurangzeb ruled India, we had many Hindu temples destroyed, among which were most of the temples in Pushkar. One which survived his evil eye still stands, and pays homage to Lord Brahma. The only weird thing about it is that it is the only temple of Lord Brahma in the world, despite him being part of the Holy Trinity of Gods in Hindu Mythology.

Made of marbles, the inner walls of the temple are embedded with silver coins that bore the name of the donors and devotees.

In the holy city of Varanasi, is the abode of Lord Kal Bhairav Nath, a reincarnation of Lord Shiva. Believe it or not, the only offerings that are made to God here is alcohol, be it whiskey or wine. Alcohol is poured directly into the deity’s open mouth, and the same is offered to devotees as Prasad.

Unlike other shops outside temples that sell flowers and sweets as an offering, the stalls outside this temple offer only alcohol for sale.

Another ancient temple of India, Devaragattu Temple at the Kurnool district of Andhra Pradesh is famous for the Bani Festival. Located on the border of Karnataka, every year on Dussehra, devotees from both the states gather in huge number with lathis, to hit each other on the heads till midnight!
Commemorating the slaying of a demon by Mala-Malleswara (Shiva), these men drenched in blood goes on with the celebration throughout the night. This 100-year-old festival was earlier celebrated with axes and spears instead of lathis. In the year 2014, police reported a total causality of 56 people during Bani festival. Medical attendants and police haplessly remain spectators to this extreme frenzy!

Further Read: 8 Best Hong Kong Temples Every Traveler Should Visit To Explore Their Spiritual Side

These mysterious temples of India are nothing to scoff about; have you been to any of these, or maybe you have been to some place even weirder! Tell us about it.

Q. Which is the temple city of India?

A. Bhubaneshwar is known as the ‘Temple City of India’ as you will find many 6th-13th century CE Hindu temples in this city. There’s Lingaraj Temple, Mukteshwar Temple, Brahmeshwar Temple, Rajarani Temple, and Yogini Temple are some of the most famous temples in the city. People often visit Puri and Konark on their trip to Bhubaneshwar. These three cities together form the Golden Triangle of spirituality in the western region.

Q. Which is the richest temple in India?

A. Padmanabhaswamy Temple of Kerala is the richest temple in India (and probably the world). Trillions of treasure in gold and cash are stored inside its six vaults. Every day, devotees in huge numbers visit the temple and make offerings to the Almighty. Tirumala Tirupati Venkateswara Temple and Sai Baba Temple follow this temple in terms of being rich.

Q. Which is the oldest temple in India?

A. Mundeshwari Devi Temple at Kaura in Kaimur district of Bihar is considered to be the oldest temple in India. The ancient temple is dedicated to Lord Shiva and Shakti. According to the archaeologists, the existence of the temple dates back to 625 CE.

Q. Which is the first temple in the world?

A. According to historians, Gobekli Tepe in Turkey is considered to be the first temple in the world. This temple is so old that the megaliths predate Stonehenge by some 6,000 years.

Q. Which is the largest temple in India?

A. Sri Ranganathasvamy Temple in Tiruchirappalli, Tamil Nadu is considered to be the largest temple in India followed by Akshardham Temple in Delhi.

46 Fabulous Places To See In A Day Around Bangalore In 2020!

16 Best Places To Visit In Warangal In 2020 That Prove It’s A Hidden Gem Down South!

Top Things To Do In Dharamshala: A Mix Bag Of 22 Popular And Offbeat Activities

10 Scariest Roads In India That Are A Driver’s Nightmare

60 Honeymoon Destinations In India In 2020

87 Best Honeymoon Destinations In The World In 2020 For A Romantic Escape!

Best Places To Visit In India By Month

Best Places To Visit Outside India By Month